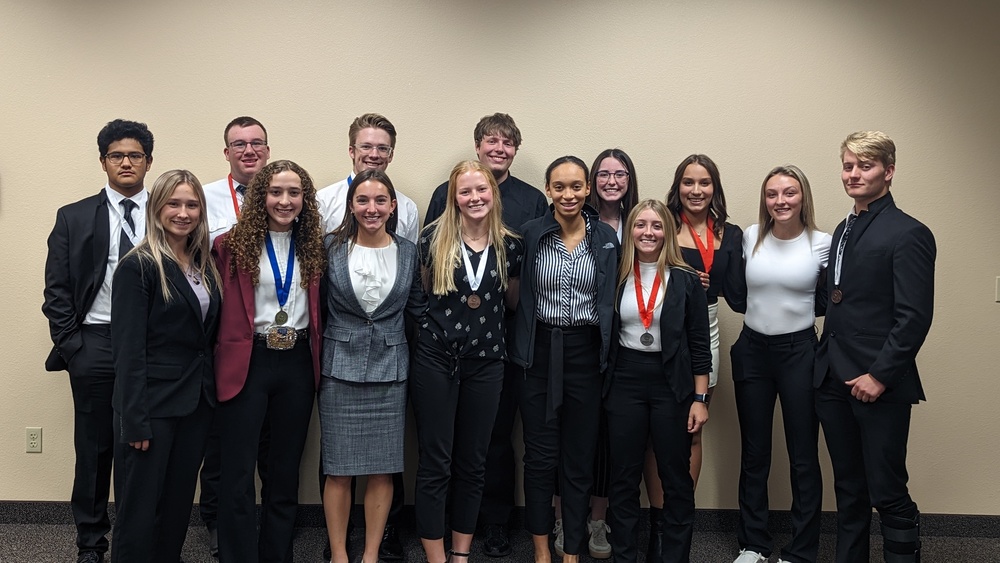 Gering, NE – GERING DECA was among 525 chapters that achieved THRIVE level recognition this year and will be commended at DECA’s International Career Development Conference (ICDC) held April 22-25, 2023 in Orlando, FL.

Each fall, DECA offers four campaigns for chapters to complete as part of their program of leadership for the year. These campaigns are designed to grow membership engagement and build lasting partnerships within the school and the local community. Chapters that achieve THRIVE level receive a commemorative pennant, flag, and plaque. The chapters also have an opportunity to participate in ICDC. In order to receive THRIVE-level recognition, the chapter completed two out of three chapter campaigns including the community service campaign, ethical leadership campaign, and promotional campaign.

The GERING DECA members who contributed to the THRIVE recognition were Mitchell Moravec, (vice president of membership services), and Cadence Schleicher (vice president of communications) with the assistance of their advisor, Broc Brown.

Because of the determination, creativity, and professionalism of this year’s Gering DECA executive officer team, Gering DECA earned THRIVE level on our community service campaign and our promotional campaign.

Our Community service campaign this year focused on leveraging the generosity of Gering High School Students to benefit the local charitable organization, Skipper’s Cupboard. Gering DECA students organized and staffed a hot chocolate booth during lunch and after school where we raised and donated $150 to Skipper’s Cupboard.

Our Promotional campaign was a multi-pronged approach to increase awareness of our DECA chapter and highlight the successes of our DECA members. To achieve this we developed and maintain a Gering DECA social media presence primarily on Instagram where we showcase our appreciation to local business partners as well as celebrate the success of Gering DECA Students at competitions. We also produced a conference highlight video that was shared with younger, Introduction to Business students so they could get a small taste of what DECA is like and hopefully join our successful DECA chapter as sophomores.

“It’s an honor to see these students get recognized by the National DECA organization for their efforts in promoting our DECA chapter.” – Broc Brown, Chapter Advisor.